Through its Chinese American WWII Veterans Recognition Project, the Chinese American Citizens Alliance (C.A.C.A.) spearheaded the national campaign to identify, honor and recognize the efforts and accomplishments of all Chinese Americans who served in the United States Armed Services in World War II. 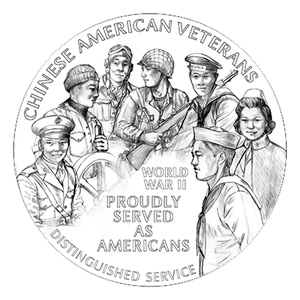 Though plans for the originally scheduled Congressional Gold Medal Ceremony in DC were postponed from April 29 due to the pandemic, the decision has been made with the Speaker of the House, Nancy Pelosi, to conduct a virtual Ceremony for the Congress to officially unveil and present the Congressional Gold Medal to a member of the collective group of our Chinese American World War II Veterans.  This significant Ceremony will be convened on Wednesday, December 9, 2020, at 3:00pm (EST).  Those wishing to receive the virtual ceremony viewing instructions should RSVP to: SpeakerRSVP@mail.house.gov by December 3.  The link will be provided the week of December 7.  Information will also be available on the Project’s website at www.caww2.org.